Touring the Ancient Ruins in Rhodes

The island of Rhodes has one of the most colourful histories in Europe, and while you could spend a long time simply looking at its most recent history, today we would like to explore its ancient history. And the best way to travel through time in Rhodes is to visit its ancient ruins and structures, reflecting on the complex tapestry of stories, mythology, and architecture waiting here, just around every corner. We also encourage readers of all backgrounds to embrace the history of Rhodes. This island’s legacy of ancient structures isn’t just for history buffs looking for more detail, it inspires all kinds of visitors. There’s nothing like standing in a place built well over two thousand years ago to make you feel connected to the past. We will be very pleased if anything we write here inspires you to finally start planning your big trip to Rhodes; if you’d like part of that journey to be with us, please consider our Rhodes Tours and Day Trips as well as our Rhodes Airport Transfers.

The Acropolis of Lindos

The first spot we’d like to talk about is unquestionably the most famous: the Acropolis of Lindos. This ancient structure dates back to the 10th century BC when the Dorians settled in Rhodes. Led by king Tlepolemus, Rhodes was one of the most important parts of the Dorian territory, and Lindos was its hub on Rhodes. The acropolis was built over several centuries, with different parts added at various stages, but its most famous part — the temple of Athena Lindia — was only completed at around 300 BC.

Over the next 2000+ years, the Greeks, Romans, Ottomans, and several other civilizations, all made use of the acropolis as a citadel with which to defend the city, and the influence of these more recent civilizations has both informed and confused the ancient architecture. This makes it a little more difficult to interpret the architecture of the acropolis, but it does create a fascinating historic puzzle for guests to work out. And if that sounds little a little too much effort, simply look out over the beautiful town of Lindos below and out across the deep blue waters of the Aegean.  If you’d like to take your Lindos Acropolis tour to the next level, consider our Private Rhodes Town and Lindos Tour, and this leads nicely to the next ancient spot on this guide…

The Acropolis of Rhodes

The Acropolis of Rhodes isn’t quite as visually striking as Lindos, but it is still very impressive. This structure was very much part of the Classical Greek Period between the 5th century and 3rd century BC. What’s fascinating about the Acropolis of Rhodes is the combination of several different structures, including a small marble odeon (theatre), the Temple of Athena Polias and Zeus Polieus, the Temple of Pythian Apollo, and nymphaeums (four small structures cut into the rock). Sadly, the Temple Pythian Apollo suffered a great deal of damage during WWII, but there is still enough there to get an idea of the structure’s original grandeur 2,500 years ago.

This ancient archaeological site is located to the northwest of the island. Today, this is the site of a ruined ancient city, and the scale of the structure is guaranteed to excite even the most jaded traveller. The various parts of the city were built over several centuries, with the temple built as far back as the 8th century BC and the reservoir built in the 6th century BC. Kamiros even had its own acropolis! Sadly, this city was destroyed by a catastrophic earthquake in 226 BC and then it was subsequently destroyed even further in another earthquake in 142 AD. What remains, however, tells an interesting story of a city that thrived over 28 centuries ago. 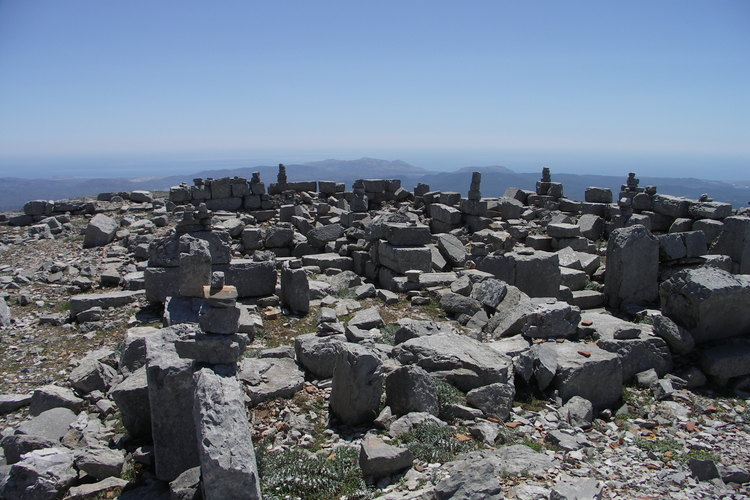 Attaviros is the tallest mountain in Rhodes. While it only rises to a height of 1,215 m, the picturesque setting draws in avid hikers from around the world each year. What surprises many people who visit is the ruined temple found at the top of the mountain. It’s difficult to imagine how challenging it must have been to build this temple to Zeus atop a mountain back in ancient times, with very limited technology. And while the temple lies in ruin, there is still plenty to look at and admire. The sheer remoteness of this temple should appeal to those who always gravitate to the road less travelled when they are on holiday.

That’s all we have time for today, but there are so many more ancient ruins to explore in Rhodes. You’ll just have to come see them for yourself… We hope we have informed and entertained, but mostly we hope we have inspired you to visit the stunning Island of the Sun! If you have any questions about this blog or the Rhodes tours and experiences mentioned here, please don’t hesitate to get in touch. Your next big adventure in Rhodes could be just a few clicks away…

Daffy is the co-founder of Rhodes Experiences. He enjoys traveling, photography and writing about the Greek tourism industry, as well as Rhodes island, which he calls home.
PrevNext

Stay up to date with news from our beautiful island of Rhodes, discover things to do in Rhodes. Contributors include, Rhodes Experience founders, Daffy & Litsa, and guest writers, local experts and our knowledgable guides!

Wish you were here?

This website uses cookies to improve your experience while you navigate through the website. Out of these cookies, the cookies that are categorized as necessary are stored on your browser as they are essential for the working of basic functionalities of the website. We also use third-party cookies that help us analyze and understand how you use this website. These cookies will be stored in your browser only with your consent. You also have the option to opt-out of these cookies. But opting out of some of these cookies may have an effect on your browsing experience.
Necessary Always Enabled
Necessary cookies are absolutely essential for the website to function properly. This category only includes cookies that ensures basic functionalities and security features of the website. These cookies do not store any personal information.
Non-necessary
Any cookies that may not be particularly necessary for the website to function and is used specifically to collect user personal data via analytics, ads, other embedded contents are termed as non-necessary cookies. It is mandatory to procure user consent prior to running these cookies on your website.
SAVE & ACCEPT
Book Now